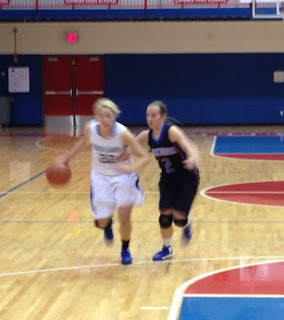 
HEBRON – The thought may be scary for opponents.


“The seniors had not beaten (Boone County) in high school,” said Jaime Walz-Richey, Highlands head coach. “We talked about that before the game. We needed to play our game and we almost gave it to them. We know we can play much better than we have.”


Highlands once again had balanced scoring. Vanessa Fisse led the way with 15 points and Brianna Adler had 12 making 10-of-12 free throws. Fisse made 3-of-6 three-point attempts.


Highlands won the rebounding battle, 39-36. Senior Jesse “Dirt” Daley led all rebounders with 10 for the Bluebirds.


“You can tell we’re progressing and that we haven’t hit our peek yet,” said Ava Abner, Highlands guard. “We still can get better. I think that our defensive rebounding will get us where we need to go.”


Highlands had been playing without injured seniors Leah Schaefer and Emilie Parton. Schaefer made her return Thursday and played in both games Friday. Parton did not play in either contest Friday.


“We’re not completely healthy,” Richey said. “Leah and Emilie are not 100 percent. (Parton) played a little (Thursday). We’re not going to be 100 percent until the end of January. But my younger girls are gaining confidence. We can be a dangerous team when we’re clicking together. They trust in one another.”


Schaefer scored just four points against Boone County but erupted for 14 against Southwestern as Highlands won all three Pool B contests. The Xavier signee made 6-of-7 free throws to go with three rebounds and a blocked shot.


Fisse put together another stellar game with 12 points. She did not hit any three-pointers but did make all five two-point attempts. Daley added 10 points.


Highlands once again saw many other player do small things to help record the victory. Lydia Graves made two crucial three-pointers and Adler had three steals with Abner and Fisse recording two each.


“It’s good that we have different people we can rely on,” Combs said. “When we had Leah (Schaefer) out, we had other people step up. That’s made our team stronger.”


Highlands led 24-19 at halftime and 38-30 entering the fourth quarter. That lead let the Bluebirds spread the court and attack the rim from different directions.


“We feel we have great guards,” Richey said. “If we do a spread, we can take care of the ball and also take girls off the dribble like we did.”


Adison Corder and Samantha Fitzgerald kept the Lady Warriors in striking range. Corder made 5-of-9 three-point attempts on her way to 19 points. Fitzgerald added 12.